Limiting Your Talents and Genius 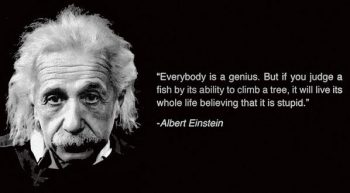 I’m smarter than the average bear. And I’m cool with that. Yet, many times when growing up, it seems that I focused my attention on painful examples where potential friends were not comfortable with my genius—and were even intimidated. It stopped being fun to be smart.

One of my personal joys with EFT Tapping was returning to a place where my gifts feel natural and enjoyable to me. I did this by looking at specific events where teachers, friends, employees, and others interacted with me in a way that *I* started limiting myself.

Isn’t that what a limiting belief really is? Isn’t it a way to put a governor on our potential?

“Nope, you can’t make it easy. Your brother/sister/mother/father/co-worker/lover/friend has to work HARD for their success.”

Indeed, we have such a cultural bias that it has to be hard that we do NOT celebrate how easy it can be for those whose gifts and energy are in alignment. Sure, we talk about flow and being in The Zone. But the T.V. specials are about heroic overcoming of impossible obstacles.

Frankly, what I see from an energy perspective is extremely gifted people energetically making life harder. And we are so free, we can absolutely challenge ourselves (to near death even)! We can attract to us really dramatic experiences and beat the drum of them to show, “Hey, it wasn’t easy for me either!!!” I have no judgment about that, yet I ask my clients whether that is truly their heart’s desire.

Or, rather than making it hard, how about if it were surprisingly easy? I mean, if you’ve spent a lifetime making it hard on yourself, allowing life to be easy, allowing your creativity and genius to flow forth… will be hard! At least initially. That is where EFT Tapping can help. We look at the limiting beliefs, and we consciously decide whether they feel good to us. And if they do not, we take steps to shift the energy.

If you are reading this, it is my assumption that you have powerful creative gifts. Allowing it to be easy is a skill you can remember. If you want some coaching, consider becoming a Thriving Now Tapping Support Circle Member.

The following article by Ron Ball gives a specific example of a learned limiting belief.

I had a business client, Jerry, with some stress and success blocks that he wanted to explore. We tapped on various beliefs and fears around unworthiness, guilt, rejection, greed, and scarcity. There wasn’t much of an emotional charge to any of these.

Then I suggested to Jerry to tap on the different EFT points. While doing so, he was to ask his subconscious or creative mind what the block might be. Jerry was to relax and be receptive. In less than a minute, it happened. Jerry had an “aha” experience and an emotional reaction when he uncovered his limiting belief. The intensity of his feelings was quite high—a strong 10. After tapping a few rounds of EFT, he smiled and had a calmness about him. What was Jerry’s limiting belief?

Actually, it’s one that many people have without realizing. The belief is:

“You shouldn’t think you’re better than other people.”

Jerry remembered hearing it from his teacher in the first grade in elementary school. Since an authority figure said it, my client believed it as a “universal truth.” The word “better” is loaded with subjective meanings. Although the teacher may have intended to teach Jerry to have humility or respect for others, it was a negative affirmation that stayed with my client all these years. What if the teacher had flipped the negative, limiting belief to a positive one. For example, what if the teacher had said:

* You have unique talents and abilities and so do other people.

* Each of us has our own brilliance. What’s yours?

* You’re so good at [talent]. Isn’t that exciting?

People are more talented than other people at some things. Or at least they believe they are and isn’t that the foundation for creating it their reality?

* Barbra Streisand is a better singer than most people.

* David Copperfield is a better magician than most people.

* Emeril Lagasse is a better cook than most people.

* Alice Walker is a better writer than most people.

Each of us are “better” at some things than other people. It may be an innate gift. Also, some people put more effort into things. Some people hone their talent. Some people have more passion. Some people are more willing to go out of their comfort zone than others. Some people exert more energy into achieving their potential. And the list goes on.

If you have this belief, here are some EFT setup phrases, you might try. Or discover your own:

Even though someone told me a long time ago not to think I’m better than other people, I deeply and completely accept myself.

Even though [whoever it was] told me not to think I’m better than other people, it was that person’s issue, not mine.

Even though [whoever it was] told me not to think I’m better than other people, I choose to express my talents and skills to the maximum.

Even though [whoever it was] told me not to think I’m better than other people, I choose to express my personal genius.

Even though [whoever it was] told me not to think I’m better than other people, I choose to know that I have marvelous skills and abilities.

Even though [whoever it was] told me not to think I’m better than other people, I am “better” at some things.

The beauty of EFT is that it’s a superb tool for helping you uncover limiting beliefs that you’re not even aware of. You can erase limiting beliefs and replace them with empowering ones of your choosing. EFT gives you the power to change your life.