Rick and I work with people on money issues all the time. We’ve worked with thousands of people with their financial struggles and desire for abundance. And the number 1 cause of conflict and struggle around money is…

Humans naturally want to stay away from things that make them feel bad… and guilt and shame are two of the toughest and stickiest emotions… especially when people don’t have the skills and concepts that permit them to clear and reframe the problem.

Guilt and Shame are so present around money that some people say they don’t have any blocks there… they’d be delighted to be a millionaire! It’s only after digging a bit deeper that they find hidden layers that they got so used to, they lost track of them. It’s kind of the way a fish in water probably doesn’t think about the water… it’s constantly there and has been all its life. Since most people inherited a lot of their beliefs and emotions from their parents at a very young age… it’s likely true that you’ve had ancestral shackles around money your whole life!! 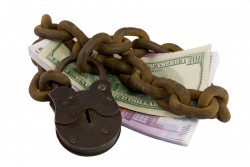 Why are Guilt and Shame Around Money A Problem?

People’s brains don’t work well when they are trying to avoid emotional pain… especially when they’re confused. The primitive brain tries to protect you by checking you out, distracting you, and making it hard to “go there.” Just the way it would make it hard to “go” towards a pit full of poisonous snakes.

For most people, money has been so associated with guilt and shameful feelings that our primitive brain views balancing the checkbook, getting a raise, paying bills, and saving… if not like a pit of deadly snakes, at least as potentially fraught with painful feelings. Guilt says, “I did something wrong.” Shame says, “I AM something wrong.” Each and every guilt and shame weighs you down and blocks the flow of abundance and creativity.

When we’re vigilant for  danger, it’s harder to focus or make good decisions, and we can easily and quickly sabotage our efforts without realizing it. Our primitive brain is powerful and may have us doing things we would never consciously plan. It’s not trying to hurt us… it’s trying to protect us based on the emotions and beliefs we have around money.

Examining, Releasing, and Updating Your Energy Around Money can transform your relationship with financial matters in really powerful ways. And releasing Guilt and Shame around money can actually connect you to your creative powers in a different way — Allowing you to feel congruent with sharing value with the world in a new way!

Imagine looking forward to seeing your bank balance and tracking your money… and feeling confident and easy about exchanging value with other people. How would it be to feel eager and comfortable around paying the bills, deciding what is a good use of your money, and actually enjoying your financial decisions?! How would it be to know you can make positive changes without struggle… and move into your dreams? It is possible. It can even be fun and easy!

Releasing guilt and shame around money can be a huge part of that journey. In fact, we have never seen anyone change their relationship with money and abundance without addressing their guilt and shame. That doesn’t mean it has to be all gone… but the emotions and causes of inner guilt and shame need to be conscious and understood… and the primitive brain needs to soothed and reprogrammed around the issues.

We love that you’re here… reading, thinking, and doing something about your beliefs. So many people struggle their whole lives with the same beliefs and emotions. You are making a powerful, important difference in your life, right now! Great job!!

Let’s take a first step together (with some simple tapping) and start soothing and identifying your guilts and shames:

Karate Chop: Even though money hasn’t been very easy for me, and I wondered what I was doing wrong… maybe I was subconsciously chasing it away all this time?!

Even though I never feel as energized and confident as I want around money and financial abundance… and I thought that was just the way it was… what if my parents’ beliefs have been getting in my way all this time?

Even though it seems like everyone has conflicts around money… and it seemed normal to struggle and feel heavy around it… what if that’s because my primitive brain has been protecting me?! What if I can release the pain and let that go!

Top of the Head: There are so many rules around money.
Eyebrow: No wonder I felt guilty and ashamed.
Side of the Eye: No wonder I could never win!
Under the Eye: It’s not surprising that it’s hard to deal with money.
Under the Nose: And why would my subconscious want more of the stuff that makes me feel bad?!
Chin: If I release the shames and guilts…
Collarbone: And helped myself understand what is true for me…
Under the Arm: Things might be different…

Top of the Head: It might suddenly be easier to move forward!
Eyebrow: I might find that I’m happy to allow flow…
Side of the Eye: Especially if I’m not “bad” for wanting it…
Under the Eye: Or getting it!
Under the Nose: Of course I never wanted more of the stuff that made me feel bad.
Chin: That made my parent and their parents struggle and fight.
Collarbone: And I can release the beliefs they passed down to me…
Under the Arm: The ones that don’t fit my life.
Top of the Head: And I can allow a new level of joy and financial abundance now!!

And if you’re feeling sad and aware of the things that hold you back… realize that you just gave yourself permission to see the “scary” stuff that’s been holding you back. Great work! Jot those thoughts down, and do some more tapping on them. Each time you make it conscious (become aware it, write it down), and clear it (with tapping), you are making your life safer and more loving. And that makes the world a better place, too.

Keep up the great work! And watch for a follow up email on this topic next week!!