Mental conflict is a lot like tug-of-war…there is a whole lot of effort, often a lot of groaning and struggle, and then one side falls flat on its face… but no one actually gets very far. People are exhausted, sweaty, and pretty much where they started.

A lot of people spend their entire life at tug-of-war. They work very hard. They put in a lot of effort and focus. And they just don’t get anywhere. 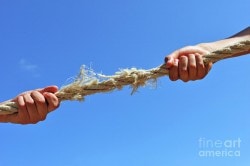 The sad thing is, they don’t know what’s going on… they start blaming themselves for not being effective. They might blame their boss, their wife, their luck. They don’t realize that they themselves are both sides of the tug-of-war, and that there is a simple way to turn things around and make moving forward fun!

Imagine if all those people were using their energy to create their dreams…If that same amount of energy went into forward movement, the distance would fly by! And making progress is inspiring and delicious. Instead of sweaty and frustrated, they might be at the top of the mountain… ahhh… enjoying the view and the breeze.

When people struggle against their primitive brain, a tug-of-war happens. The conscious, thinking part of their brain wants to move toward a goal, and their primitive survival brain says “No way!” Since our primitive brain is rather like an 800 lb gorilla, it’s amazing that people get anywhere at all! The fact that they sometimes do shows how strong and determined they really are.

If you can get your primitive brain aligned with your thinking brain, you will find yourself in a whole new place. The things that used to be incredibly hard, suddenly become light and easy… actually fun!

Cathy here: People often ask me how I get so much done in a day. While I do have some places where my primitive brain resists… most of the time, it’s aligned with where I’m going. Since I’m not fighting myself… AND my primitive brain WANTS to do the things that help me move forward, it’s sometimes hard for me NOT to get things done. I crave the next step like most people crave chocolate. My primitive brain has learned to associate progress with abundance and safety. I still love to play, and work has become play in many ways for me.

We’ll go much deeper into this in our Reprogram Your Primitive Brain 6 week online course, but let’s get you tapping so you can help your primitive brain stop tugging and wrestling with you, and start helping you out!

Karate Chop: Hi Primitive Brain…I know I yell at you a lot. I wanted to stop by and let you know that I am open to appreciating all you do. You really do care, and you work really hard! Thank you for caring so much about my safety.

Hey Primitive Brain… I’m so glad you watch out for my survival. And you never take a break. You do so much for me… and I have good news for you now. In the past we struggled and fought. And the more I pushed, the more scared and protective you got. We can do this a new way now.

Dear Primitive Brain, Thank you So much. I’m sending you love and appreciation, and I’d love to offer you some new perspectives. What you did in the past was really smart. It was the best anyone knew how to do. And you helped me to the best of your ability. Let’s work together from now on, and play together as we create something new!

Top of the Head: I never knew how to listen to you before.
Eyebrow: I just felt frustrated and angry.
Side of the Eye: I blamed myself.
Under the Eye: I didn’t understand.
Under the Nose: I’m sorry, Primitive Brain.
Chin: I’m here now, listening to you.
Collarbone: What do you need?
Under the Arm: What scares you?

Top of the Head: Some of those scary things…
Eyebrow: Are really out of date.
Side of the Eye: But no one told you that.
Under the Eye: Some of them are only scary to small children…
Under the Nose: But not dangerous now.
Chin: I want to help you relax and upgrade.
Collarbone: I want you to feel love and appreciation.
Under the Arm: I need your help and support.
Top of the Head: And I offer you mine.

How does your body feel? A lot of people feel more relaxed and calm after this kind of work. Their primitive brain is relaxed, so their bodies don’t feel as stressed and vigilant.

We’d love you to join us in Reprogram Your Primitive Brain! We’re going to help you focus in and upgrade your primitive brain… wipe out old, outdated programs, and give you a new, more powerful operating system…

See you on the other side!