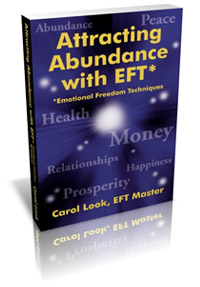 Order Attracting Abundance with EFT E-Book with Tap-Along Audios
Also available as a paperback although I highly recommend the e-book version with the tap-along audios. Table of Contents is listed here.

As an emotional freedom coach, I find that many clients have anxiety and worry around money and success. Inside, they know they have not reached their potential for financial abundance. They have resistance, fears, guilt, past failures, inner conflicts, and limiting beliefs about money that block their ability to use the law of attraction to allow well-being to flow into their lives. I recommend this book to my clients, and we often tap together using EFT on the specific memories Carol’s abundance tapping exercises and games bring up.

Let me share with you a few specific client stories. One client is a new mother, her second child. She and her husband really needed money. Their car was broken down. They were tense and worried. I had her do just one of the games, the Cash Comfort game where she held a $100 bill in her hand, noticed the feelings it brought up, and tapped on the sequence of points while staring at the bill and holding it. There is more to the game, but the key point for this client is that after the game, she felt calm and hopeful. She did their taxes, which she had dreaded. And it turned out they were owed $1500 in a tax refund. Naturally, they would have eventually done their taxes and received the refund. Those of us who work with Carol’s Attracting Abundance with EFT materials, though, see this kind of “surprise” happen for MANY people when they let go of even SOME of their fear and worry.

Another client was obsessing about his financial situation… and some would say with good reason. It was keeping him from sleeping and his negative, hopeless thoughts were leaving him with no energy to take proactive action. He tapped through the entire book and the exercises. And he continued to tap for 20 minutes every day using the book as his guide. His energy improved and his faith started to return. At the end of 30 days, his mental clarity and level of positive action towards turning around his financial situation were dramatically better. No miracle fortune arrived, but he also did NOT lose the house and the car!

We know from the Law of Attraction that first we must shift our vibration into one that attracts and allows the flow of abundance. This client’s persistent action not only has helped him engage in a new business venture, it also has restored much of his hope and confidence (and when he needs a boost, he has a tool he can use for emotional self-care). I’ve found that when we are surrounded by negative circumstances, daily tapping with EFT using a series of well-crafted steps like these in Attracting Abundance with EFT is like taking a “shower” to wash off the “dirt.” It feels so much better when we’re done!

My last story observes the effect of this book on someone who was already successful. This client has a growing practice in the health arena. People who know him consider him positive, upbeat, and confident. All true! Yet, his business had hit a ceiling, and he knew his own limiting beliefs were keeping him from breaking through to a new level. We used EFT to tap on specific issues, and I sold him a copy of the book. After going through it once, he continued to tap on an exercise or two EVERY DAY. The results he credits to the book and EFT include:

– He signed a buyout agreement with his risk-adverse partner so he can take risks (and benefit from the upside) while providing the security the partner demanded; he stepped up as the leader rather than staying within his previous Comfort Zones.

– His vibration changed around his location, and a new location opened up that has meant FAR more visibility and walk-in clients… and he’s no longer in the same mall with a liquor store and tattoo parlor….

– His business is generating more cash than at any previous time in its long history; his employees are going to be getting a nice bonus.

For me what this book does is help activate ALL that I already know about business. Clearing the blocks to success & abundance, increasing prosperity consciousness, activating the Law of Attraction, and claiming abundance now… these are the four simple steps covered in this book. Carol makes it fun. This book makes it easy.

Review the Table of Contents of Attracting Abundance with EFT