I Need a Pause Button in the Center of My Forehead

I was really enjoying the movie. I hadn’t seen the original Frozen nearly as often as The Boy had, but this was his first trip to a big movie theater ever. And Frozen 2 had us all enthralled. Wow.

As the water horse scene was getting more intense, I realized something distressing…

What was missing is what I needed MOST right at that moment:

Where was the remote?!? There was none to be found.

There I was, faced with a rising biological imperative and forced to break away to take care of my needs. (Sad face.) And yes, I held on until the water horse scene was over, and I’m so glad I did.

Which brings us to another biological need when we’re distressed: the need to get away from a threat… to release the building-up strains and tensions, and stop the rising feelings of being pissed off and primal that are so, so hard on our body and mind.

But I don’t always know how to do that!! Do you?

I need a pause button!!! It feels important enough, I’d even put one in the middle of my forehead!

I know that sounds really Rickulous, but hear me out.

Have you ever found yourself in an argument you didn’t want? One where… whether you felt you were “winning” or “losing” …the experience was doing nothing good for the relationship. What typically happens?

The battle keeps going, of course!

Because… that is what our electromagnetic biochemistry and primitive brain were designed to do. Once we start fighting, we fight until we can flee or our attacker does. (Or one of us… or the relationship… “dies.” You know, “Fight to the death!” It’s a thing.)

Every time this dynamic has played out in my life, whether I was a participant or a witness, it’s hurt. I’ve regretted it later.

Have you ever said or done something that you deeply regret?

Let’s all together take a pause here to feel what we feel. Three breaths together.

We’re human. We get triggered. It can be helpful to be strongly aware and intentional about what we want to happen.

When I get triggered and activated into primitive brain, what I WANT to happen is that one or both or all of us recognize what’s happening and…

Sounds great. But, where is the Pause Button when you need it?!?!?

Perhaps you’d be willing to be a part of developing them?

Here’s the challenge we face:

How we handle being triggered makes a huge difference in our relationships and our self-image.

In my twenties when things got intense, I’d get louder and louder. If louder didn’t work, I’d get more pointed and jabby with my comments. Up against a real pro at this kind of joust, I’d end up saying something like, “Fine! You’re right. You’re always right. I’m wrong.” The downstream effect of this was loss of trust, connection, and sense of safety.

I feel sad that in all my upbringing, and the love I had, and all I read, I was never exposed to the concept of the primitive brain and fight or flight (much less freeze and fawn).

Then I started noticing when others were in THEIR primitive brain. I noticed how when others triggered, regardless of whether they were 3- or 60-years-old, they were like… a different person.

If we’re going to live in a dynamic of Emotional Freedom, this primal aspect of our humanness will evolve.

Here are some aspects of that conscious evolution.

There are many more aspects to this. And I want to be real with you. This is HARD.

It means letting go of the arrogance that we’re in charge of other people’s feelings (much less our own). It means being with emotions that are anchored in dysfunctions from our childhood (and going back many generations).

I know with all my heart this hard work is worth it and crafts a different future for ourselves and our children and loved ones.

When I look at myself in the mirror, I see a man who is not emotionally like his father and his father’s father. Every baby step I take means my family and friends and community benefit from my emotional growth and change… just as I benefit from theirs (and yours!).

Our work on consent, boundaries, safety, and respect matters! De-escalation matters! It’s precursor work that expands Emotional Freedom for All.

Thank you for being a part of this engagement. May we all find it easier and easier to take a PAUSE when we need one.

Until next time, I'm Rick at Thrivingnow. ​What have you found helpful in these situations? I truly invite you to share with the community what you are exploring and learning.

Episode 10 ~ Emotional Freedom for All Podcast

Looking for more on the Pause as well as cleaning up relationship challenges? I highly recommend this book: 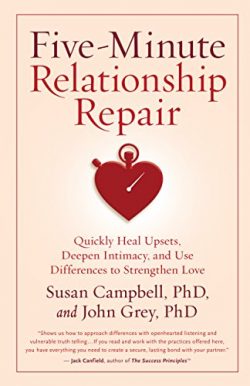