The Reason Money Is So Hard…

Many people are convinced that they won’t be able to change their patterns around money. And this makes sense!

They’ve tried and tried in the past. They’ve budgeted, clipped coupons, saved, and struggled… only to have things backfire. They’ve worked so hard, gave up so much that they wanted, and ended up right where they started… or worse.

They’re afraid to try again. The feelings of failure and of powerlessness are painful and incredibly frustrating. It feels like nothing will ever be different.

However… changing the underlying beliefs and rules around money can transform the journey into something amazing and empowering.

Most people carry around toxic and unhealthy views of money. They inherited them legitimately. Parents, society, and bad experiences all contribute to shackles and blocks. And these courageous folks are struggling along, wondering why money is SO hard… when it’s really the BELIEFS that are pulling them down. 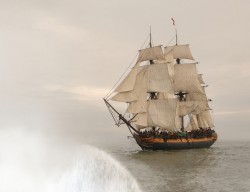 Consider this… if someone just KNEW the earth was flat, they’d consider sailing away from land to be suicide. Their primitive survival brain would shackle them so they couldn’t move very far… even if they desperately craved experiences out in the wild blue seas. Now, if someone could prove to them that the old belief was false, and that the earth is round (or nearly so, it actually bulges 26.5 miles at the equator), it would suddenly become LOTS easier to sail out and get what they wanted. No more shackles holding them back.

Beliefs around money are a lot like that. If we believe (consciously or unconsciously) that having money will destroy who we want to be as a person… will make us greedy, bad, lonely, selfish, or mean…. people with the highest integrity will run away from it!

If YOU have struggled with money, it may be a sign that you have a lot of courage combined with a lot of integrity… along with outdated beliefs around money!

Surprisingly, most people do have outdated beliefs… because most people have never delved into the source of their core beliefs about money.

We don’t have the space to examine the root causes here… but there is a different perspective on money that can allow you to let it in with integrity. Watch for our next email where we’ll share more about that, and introduce our latest program, designed to help you release old beliefs and find a new, high integrity approach to money that will let you be in alignment and congruent with having more abundance!

In the meantime… let’s tap on this!

Karate Chop: Even though I’ve given up on money… I can never win! What if I can change the rules of the game and find something even better… a way that really IS easy…

Even though my struggles with money may be a sign that I have a LOT of integrity and want to be a good person, what if there is a new perspective and approach to money that lets me have abundance AND integrity?

Even though part of me may have been protecting myself from money and all the bad things it can mean…it might be time to re-examine my beliefs and learn how money can be aligned with who I am.

Top of the Head: This is just too hard!
Eyebrow: I’ve tried in the past.
Side of the Eye: Money just doesn’t work for me…
Under the Eye: No matter what I do!
Under the Nose: I feel like I’m always struggling.
Chin: I feel like I just can’t win!
Collarbone: It almost feels like I’m fighting myself…
Under the Arm: And I don’t want to keep beating my head against the wall!

Top of the Head: What if my integrity has been getting in the way?
Eyebrow: What if the old ways money was used really blocked me.
Side of the Eye: I don’t want to be like them!!
Under the Eye: Part of me refused…
Under the Nose: Even though I wanted more money.
Chin: Maybe I can appreciate my integrity…
Collarbone: What if I honored my courage and my resolve…
Under the Arm: And looked for a better, cleaner way to work with money?

Notice how your body feels. What came up for you?

There is a different way of looking at money, a different energy of abundance. We’ll talk more about this in our next email when we introduce the course we developed based on your recent survey feedback and after 1000s of hours of working with people with money struggles. We are SO excited to share it with you and hear what you think!

Watch for our email, coming soon!!