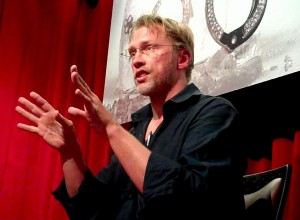 If Dr. Ruth and Jon Stewart had a son, that son would be Reid Mihalko…

Reid is one of the only male sex and relationship experts touring the country today who appeals to audiences of all ages, orientations, and backgrounds.

Reid has appeared on the Emmy award-winning talk show Montel, Fox News, VH1’s Scott Baio is 45 and Single, Showtime’s Penn & Teller’s Bulls**t!, Canada’s The Sex Files and SexTV, and the short-lived Life & Style, on NPR, Sirius’ Maxim Radio and Cosmo Radio, and in Marie Claire, GQ, Details, People, Newsweek and The National Enquirer, as well as media across the globe in thirteen countries and at least seven languages.

A sought-after presenter and teacher at colleges, sex-positive stores, and events across North America and Canada, Reid is known for his charisma, integrity, and emphasis on using humor to make people comfortable talking about sex, intimacy, and relationships. His ability to present information in a comedic and knowledgeable manner is unparalleled.

Reid has been a featured speaker, presenter, and keynote at dozens of conferences on relationships and sexuality. The workshops he’s designed continue to be taught all over the world and have reached tens of thousands of people. He has been a writer and producer on a number of films and television projects about sex and relationships, and he appears regularly in the media as an expert on subjects ranging from consent to jealousy to sexual confidence and relationship self-esteem.

Reid, one of four boys, grew up in New Hampshire with a mother and father who loved one another tremendously, but who–like many of our parents–lacked the skills to communicate their relationship needs and upsets effectively. Reid witnessed what happens to a marriage (and a family) when such skills are lacking.

Whether it’s a small group of concerned parents, a board room of Hollywood executives, or an auditorium full of cheering students, Reid conveys that sex and intimacy don’t have to be scary. He embodies his message: You can create more self-esteem, self-confidence, health, and humor in the bedroom!

Reid can be reached by email at reid@reidaboutsex.com. His website includes explicit teachings on sexuality and is may not be suitable for viewing at many workplaces. https://www.thrivingnow.com/reidaboutsex

Rick adds: Reid is a professional (and highly regarded) sex educator. He teaches workshops around the country for people to learn to feel comfortable in their body, and to enjoy their sexuality in a way that has integrity and pleasure… within the relationship model of their choice.

Sex is an integral part of the human condition. And it’s also an area where there is tremendous suffering, inflicted shame, confusion, abuse, and pain. Knowing Reid as I do now, I see how he joins Cathy and I in helping people re-connect with their sexuality in a healthy and balanced way.

His clients cut across the sexual spectrum (straight, gay, bisexual, transgender, etc.), and I deeply appreciate how honorably and humblyand playfully Reid approaches what are for many excruciatingly uncomfortable subjects.

We invited Reid to co-create with us on a few projects. The first is Breaking Out Of Your Shell. In this series, we’re focused on basic issues: feeling worthy, having a safe and powerful NO, and making rejection work FOR you rather than against you. So our conversation is PG-13 so to speak in this series. We invite you to learn more.